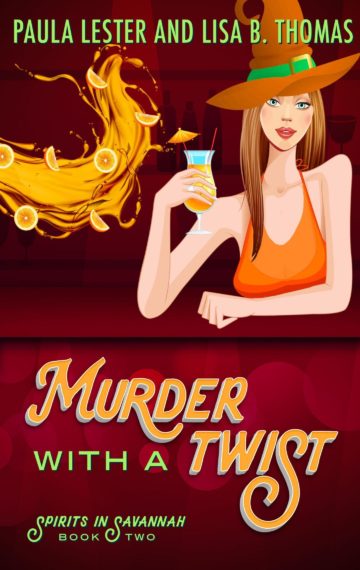 It’s the grand re-opening of Cork’s Bar, and Salem Flynn is anxious to make her debut as the new owner.

The place is jumping on Halloween night with Sixties style entertainment and plenty of drinks to go around. The last thing Salem expects is to have another dead body to deal with. This time, it’s a popular singer who has sung his last song, and the costumed suspects are plentiful.

Two deaths in a month’s time have some people staying away from the “murder bar.” The sooner the case is closed, the better for everyone.

One person who can’t stay away, though, is Salem’s estranged mother, whose visit after twenty-five years should be a happy reunion. But Salem is surprised when her mom seems as anxious to solve the murder as she is.

Can Salem handle the investigation along with her new clientele? Salem may be new to being a witch, but word on the street is that Cork’s is Savannah’s first witch bar.

Murder with a Twist holds true to its title. With surprises around every turn, paranormal readers are sure to love Book 2 in the Spirits in Savannah mystery series.

We use cookies to ensure that we give you the best experience on our website. If you continue to use this site we will assume that you are happy with it.Accept